Historically, products were tracked by batches. Pieces were kept together and the slowly changing batch number was marked using stamps, mold pointers and stencils. Batch markings did not need to be re-programmed quickly.

Today, we understand the advantages of using individual piece identity. Keeping track of the individual pieces rather than batches means that valuable data about the parentage, process history and ultimate disposition of each piece can replace the crude averages typical of batch data. Modern programmable identification techniques such as ink jet, dot peen marking, and bar codes now permit practical identification piece by piece.

Newer programmable identification tools capable of marking high density 2D barcodes and dot codes permit a small "database" to be marked on each piece. One is therefore tempted to mark data including everything that is known about the piece at the time when the marking is done; in effect, marking the Gettysburg Address. Such database markings are necessary and desirable when that data must follow the piece into venues where computerized databases are neither available nor practical. We should remember that the Internet will soon be making online lookups practical anywhere.

However, within the closed plant or corporate venue, the higher cost and lower reliability of high density codes suggests that we should identify each piece only with a short License Plate Number (LPN) which indexes a complete file record for that piece within a networked, real time computer data base. The Gettysburg Address (and much more!) is then available in real time from that database which can be further updated with valuable data long after the initial (LPN) marking is done.

Figure 1. presents a "standard" bar code symbology application, specifically a Code 128 symbol which encrypts an 8 decimal digit LPN "12345681" and is here used to identify a hot band coil. As is the accepted practice, the bar code data is also written in man-readable characters underneath the bar code pattern. (The appended "59" check characters will be explained later.) 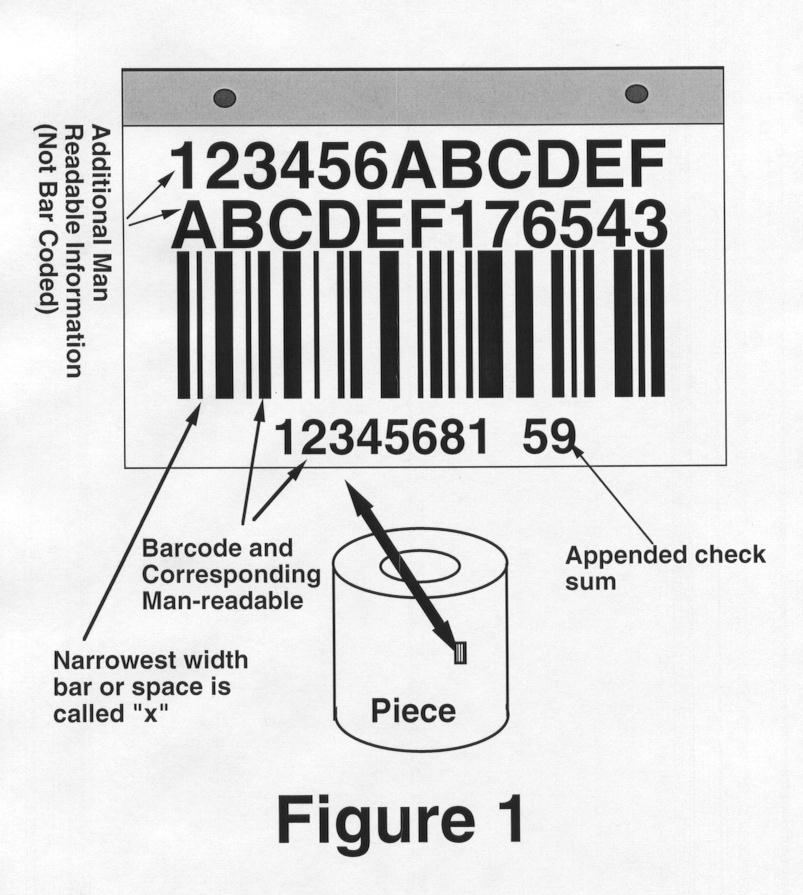 After choosing an appropriate LPN, the symbology and code size must be intelligently selected. There are many standard bar code symbologies.

The narrowest bar or space in a linear (1D) bar code is called the "x" dimension. In Figure 1 (full size), the "x" dimension is very close to .060". Such a code is readable from up to 20 ft with a modern long-range laser Bar Code Reader (BCR). If Code 39 (another common bar code symbology but with full alphanumeric capability) were used to encode the 8 decimal only digits, the "x" dimension for the same physical barcode length would shrink to about .035" and would be readable from less than 10 ft. Therefore, choose the symbology carefully.

When Implementing an LPN system:

1. Choose an LPN length which will provide sufficient "permutations" and no more.

Typically, the LPN should allow the unique piece identification for each piece produced (converted) within a closed facility in 5 years (the "wrap").

For example, an 8 decimal digit LPN (100,000,000 permutations) would suffice for a facility which annually produced or converted 20,000,000 individually identified pieces.

The individual LPN's will permit data to be collected for each individual piece until it is modified by a process that obliterates that LPN.

The man readable check digit will permit the LPN to be manually entered (backup) with a high degree of accuracy. Most manual transpositions and misreads will be flagged if the manual operator must also enter the check digit.

In our example of LPN = "12345681", the check digits could be defined as the check digit used within code 128 symbology. In this case "59" . This is a mod 103 test so entry errors are reduced by over a factor of 100 if the check digits are entered and then tested by the application.

3. Don't be afraid to add additional alphanumeric (Gettysburg Address) information when the LPN is marked. But don't put this additional information in the automatic identification symbology - put it in the database where it can be accessed using the LPN.

4. Immediately after applying the LPN to the piece, read the LPN on the product and create first database record entries. This will eliminate errors associated with unreadable or missing code markings and will identify mixed up markings (e.g. Shuffled stacks of tags). This is called VERIFICATION.

5. Use the LPN to track the piece and to update it's historical database as it proceeds through the process. You will soon find that the LPN that can be automatically read will become more useful than the Gettysburg Address .

6. As the LPN markings are removed by the processing (e.g. rolling) , re-mark the parent piece with a New LPN (numbers are free) - don't try to reuse the old LPN . The processing which removed the original LPN may also create new (child) pieces (including valuable scrap) each of which needs a new LPN.

7. The old (pre-processing or parent) LPN database must then be updated to include field(s) containing the LPN's of all the new child pieces. Optionally, the parent LPN can maintain a pointer to a linked list of child LPN's. Additionally, the database(s) containing the new (child) LPN's must include the (now obliterated) parent LPN. This permits material traceability in both directions --- our goal.