They wanted a simple solution to an age-old problem. What they got was a high-tech solution that exceeded expectations and a relationship with a company dedicated to perfecting their product. 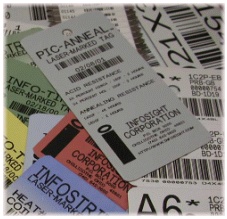 Charter Steel is a Wisconsin-based company that produces hot rolled steel in rod and bar form, as well as annealed rod bar and wire. By the end of the 1990’s, they realized that modern technology had to offer a better way to provide cradle-to-grave identification of their products than what was currently available.

The initial challenge was to find something that could withstand both the extreme temperatures of the annealing process and the harsh acid baths of pickling. Unfortunately, there was nothing that would, and Charter had to stick with the industry standard “dog tags,” a piece of metal embossed with a minimal amount of information.

“The dog tags just weren’t suitable,” explained Tim Leahy, Charter’s Senior Project Metallurgist. “Seventy percent of our coils are shipped across the street to our own processing division. Getting the information from one place to the other was a major issue. We needed to convey things like the size and grade of the product, the customer it was for and their purchase order number, the size of the material, the grade of steel, the heat number, and our own identification number. When you consider our production capacity, the ability to scan becomes critical.”

Indeed, Charter produces upwards of 300 coils during the course of an eight-hour shift. In order to properly track the coils, they needed their tags produced in real time, requiring two embossing machines in order to keep up with the output.

“The whole system of using dog tags was a nightmare,” Leahy said. “The machines that made them were awful. We called them ‘thumpers’ because they were these unwieldy monsters that vibrated themselves to death after a period of time. We had to buy three of them in order to have two running at any given time, and we were considering buying a fourth.”

Leahy also said that the lack of a computer interface between the mill’s inventory control software and the thumpers created a human error problem. “The bumpy bar codes were unsuitable for what we were doing. We basically put information on a screen in front of an operator and had them type it into the thumper, hoping to keep mistakes to a minimum. The frustration was enormous.”

Charter knew the solution to their problem was a barcode system, but finding a tag that would carry the laser-readable black marks through pickling and annealing was another matter. The company went through a number of tags that either tore off because of their light weight, or became smudged or banged up when the coils were moved. “We did have one tag that performed well,” Leahy said, “but on 15 to 20 percent of them the readers couldn’t scan the bar code. It was better than what we had before, but it still wasn’t good enough.”
At that point Charter came to InfoSight in Chillicothe, Ohio. “We found out about a mill in Ontario that had an InfoSight tagging system, and that sounded like what we were looking for,” Leahy recalled. “So we called them up and told them about our frustrations with the thumpers and the other tags we’d tried. When they heard that, they laughed. They guaranteed that their system would work.”

InfoSight sent Charter some sample formulations of tags to test and discovered that some survived the process even though they were not meant to. “These tags had a survival rate of 98, 99 percent,” Leahy said. “And we said we could live with that. It was a real eureka moment.” InfoSight jumped on this information in order to tweak the formulation so it would best suit Charter’s needs.

Once the new formulas were tested, Charter was ready to go online with the new system. Unfortunately, a new set of problems surfaced that complicated matters.

“We got a call from processing,” Leahy recalled, “and they said that the information on some of the tags was smearing and wiping off. We had to suspend the new tag program and go back to the dog tags, which set off a near-riot at the rolling mill. After working with the laser printers, they did not want to go back to the thumpers.”
Again, InfoSight’s engineers jumped into the fray to work out the problem. It turned out to be twofold. First, they discovered a problem in the curing process at one of InfoSight’s vendors. The other turned out to be a miscommunication.

“It was our fault, really,” Leahy said. “InfoSight did everything we expected of them, but we threw them a curve. We had a second acid bath after the annealing process. The tags were never designed for that.”
Research found that the annealing process changed the chemical characteristics in the tag’s coating that left it susceptible to damage during the repeat of the pickling. This led to a 3 to 5% failure rate, more than twice the original.

“Again, InfoSight jumped right on the problem,” Leahy said. “They reformulated the tags and are working on new formulations as we speak. We have a workaround in place until that happens, but that is still nothing compared to what working with the thumpers was like.”

A secondary issue Charter had with the InfoSight product was what their customers would think of the tags. Thirty percent of Charter’s product goes to outside clients, and there is no control over how it is processed. Leahy admits there was some trepidation over what would happen to the tags, and even set up a separate tagging system for outbound product. However, since the beginning of 2002, they have received no complaints on the PIC-ANNEAL tags.

The InfoSight experience has been a beneficial one to Charter. Leahy explained that, “We were hoping to make a dent in the identification problem, but instead this system eliminated it. The logjam we experienced with the thumpers was gone within an hour or two of putting the InfoSight laser system online.”

He also cited the fact that Charter’s engineers love the new system because of its speed and ease of maintenance, and InfoSight’s total dedication to their product. “They have worked closely with us to make the system even better, down to redesigning printer gears to stand up under the rigors of operating in a steel mill. They keep most replacement parts in stock, and they guarantee overnight delivery. And they’re bound and determined to develop a formula that gives us a 100% survival rate.”

In addition, Charter’s engineers were able to write software that let their inventory control system communicate directly with the tag printers, eliminating the middleman – and with it a great deal of human error. 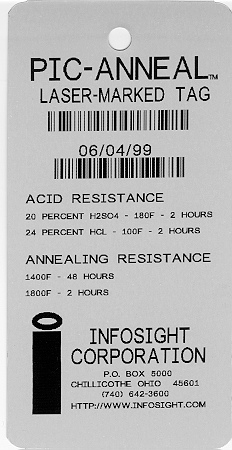 “With InfoSight, we got things out of this system that we didn’t expect. They stand solidly behind what they do and will always do what they can to come up with a workable solution.

“As far as our confidence in their products, let me put it this way. Charter recently purchased a rolling mill in Cleveland. When we walked in to look over the facilities, we saw that they had the old thumpers on the line. Now they have an InfoSight tag machine.”
The PIC-ANNEAL® Laser-Marked tags measure 3” by 6” and sport a hole punched near the top for easy attaching to wire coils. The tags are marked with a standard CO2 laser, resulting in black print across the light gray surface. The bar codes printed on the tags are readable by any standard bar code reader. They feature two-hour resistance to acid baths of 20% H2SO4 at 180o F and 24% HCL at 100o F, and withstand 1400o F heat for 48 hours and 1800o F for 2 hours.

As Ed O’Neal, InfoSight’s Laser Product Manager, says, “If someone has a tagging need that can be solved with a slip of paper, turn them away. We want the tough stuff… the kind of jobs that make other companies cringe… the kinds of jobs that other companies cannot do. This is what we have built our business and our reputation on.”

PIC-ANNEAL® is a registered trademark of InfoSight Corporation