The Association of Women in the Metal Industries was formed in 1981 with the mission to promote networking, growth, education, and mentorship of women in the male metals industries. The annual conference was recently held in Orlando, FL, and InfoSight’s Becky Dolan was in attendance.

Becky has been an active member of AWMI for 21 years. She has held several Columbus Chapter board positions, including a tenure as the chapter President, regional positions, and is currently the International Membership Chair. When asked about why she values her AWMI membership, she says it has been influential in her professional development and is an excellent support network. The education and experiences at AWMI have increased her business aptitude and public speaking abilities. She mentioned how helpful it has been to learn from her counterparts who have successfully navigated difficult situations, which are inevitable in the workplace. Becky encouraged InfoSight to become a corporate member in 2008, and InfoSight continues to reap the benefits of that membership.

Speaking specifically about the conference, Becky became animated, saying “It was just awesome. We were very busy from morning to night, but it was well worth it. The speakers were amazing and the material they covered was relevant and immediately helpful.”  As International Membership Chair, she was particularly excited about the large number of first time and new member attendees and about awarding milestone achievements to corporate members.

Two of her favorite events were the behind-the-scenes tour at Universal Studios, along with the follow-up keynote address by the engineers from Universal, and Chad Sheehan who spoke about his S.A.V.E. Yourself Program. During the behind-the-scenes tour at Universal Studios Islands of Adventures, members were treated to up close looks at the operation and maintenance of roller coasters and other rides at the park. The engineers covered the physics calculations necessary to provide the magnetic propulsion for The Incredible Hulk Coaster®. They also explained how they drain all the water from Dudley Do-Right’s Ripsaw Falls® every night for inspection and maintenance. The following day, Show Producer Shelby Honea and Engineering Manager Amanda Zielkowski addressed the conference and further explained how much engineering and planning goes into providing a safe yet thrilling experience for park guests.

During an educational workshop, Chad Sheehan spoke to the members about situational awareness and living in a dangerous world. A lifelong law enforcement officer, Sheehan developed the S.A.V.E. Yourself program to train civilians in surviving violent events. Sheehan offered many tips on how to read a situation and react accordingly. Advice ranged from the basic such as pay attention and know where the exits are to more counterintuitive ideas such as not following “the rules” when situations get out of control. 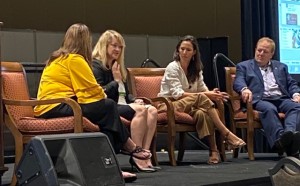 Other valuable programming at the conference included a moderated panel discussing the steel industry, leadership training, and an economics panel. Becky returned from the conference invigorated to excel in her role as General Manager, Sales Administration & Market Advancement at InfoSight. As she discussed the conference, it became clear how AWMI mindfully promotes its four pillars – networking, growth, education, and mentorship – for the benefit of all its members.